For about 7 or 8 years during my teens and early twenties, I was a vegetarian. Since no-one else in my family was, I had to kindof figure out the whole vegetarian cooking thing for myself, and thus collected and received some vegetarian cookbooks. One of my favorite quick and easy recipes back then was Napa cabbage soup. After I started eating meats again, I pretty much forgot about the soup and didn’t make it for ages. Fortunately while doing groceries I didn’t know what to buy and almost ended up with the same veggies as the week before. I say fortunately, because I got kindof fed up with myself. How could I possibly end up with the same stuff as the week before.

And then I saw a whole big pile of napa cabbages. 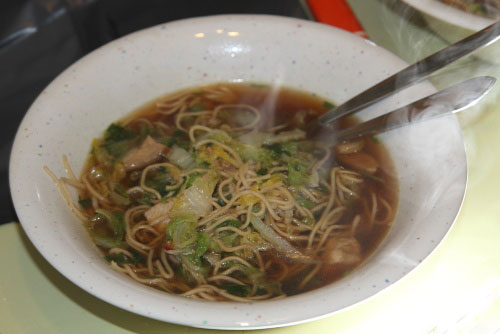 I suddenly remembered the wonderful soup I used to make, though I’d forgotten half the ingredients. I figured I could do a non-vegetarian version and it would be awesome. The soup in it’s original form had always been wonderful, so I was pretty sure in one way or the other I could pull it off.

In the end it didn’t really resemble much of the old recipe anymore, but it was still a very tasty soup. Not too filling, no exploding tummies for once, but tasty, healthy, hearthy and done within 20 minutes.

Napa cabbage soup (recipe feeds 6 as a starter, 3 as a main course)

Chop the garlic fairly fine. Pour some oil into a medium sized soup kettle and  fry the garlic for about a minute. Add the pork strips and the small chili (finely chopped). Once everything starts to brown slightly, add the vegetable broth and the spring onion (in smallish pieces). Bring to a boil. Once the broth is boiling, add the egg noodles (as much as you like, I like quite a lot of noodles in my soup). Once the noodles have softened add some thin sliced napa cabbage. Pour in a generous amount of soy sauce (to taste), add a pinch of sugar, let it simmer for a minute or so and add a generous amount of fresh cilantro (again, to taste), stir, serve and enjoy!