When I went to US for the first time, for my dad and stepmom’s wedding, I had cinnamon rolls for the first time. My stepmom got the original cinnabon giant rolls. I loved them. Coming from Holland I’d grown up eating sandwiches, just bread with cold cuts or cheese (rarely both), maybe an egg, but not too often, and usually we were allowed to have up to one slice of bread with a sweet topping, like peanutbutter or nutella. A full on, sweet breakfast basically didn’t exist. Fench toast was birthday thing or such. On special occasions we’d have croissants. My dad would sometimes make ‘english breakfasts’ with bacon, eggs and tomato, but that definitely wasn’t a standard Dutch thing. We were a little different doing something like that on a somewhat regular basis. Basically, a Dutch breakfast was (and often still is) pretty boring.

So during the week I spent in the US that first time I figured that breakfast in a different culture is a whole different thing. The choices seemed endless. Pancakes, waffles, cereal, a full-on continental breakfast, eggs in any way, shape or form, bagels. The only thing that wasn’t all that common was the standard slice of bread with cheese. Many of the US breakfast to me looked like cake, or special occasion cookies, or desert at the least. Not breakfast.

So one morning my stepmom presented us with the cinnamon rolls. At first I doubted if I would even eat it. It looked very strange for a breakfast food, more like cake, or pastry (which to me wasn’t breakfast. Also, I was a very very picky eater at that time.

My dad convinced me that I should at least try 1 bite, that it would be incredibly rude if I wouldn’t. Eventually I did, a tiny bite. And about 3 seconds later I devoured the entire thing and asked if we had more.

That was it. I was hooked. I love, love, loved this breakfast. I couldn’t believe I was allowed to eat something so sweet and sugary and tasty for breakfast. This didn’t taste nutritious. This just tasted good!

Ever since that first time I’ve been hooked. I’ll buy cinnamon rolls in airports, at malls, or just at the grocery store to bake them at home. They’re great!

This year I spent the Holidays in Holland. And I suddenly had a craving for cinnamon rolls. I decided to give it a try and make them myself. They turned out awesome, but they took a long long time to make. 2 times rising, then rolling them, then more rising and then baking. All in all it took me hours and hours to finish them. Well worth it, but not something you want to do on a random weekend morning. So I went looking for quicker recipes. And alas, I found one. 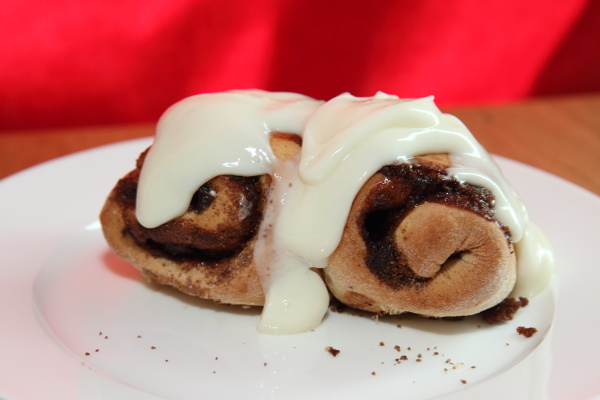 Last Sunday was the time to check them out. You can find quick cinnamon roll recipes all over the net. I took a little of every recipe, tweaked and altered a bit, and ended up with great rolls. Admitted, they’re less fluffy than the original ones, but for the time it takes to make them, they’re awesome. Very very tasty, and extremely quickly done!

Mix 1 1/4 cups of flour, a tablespoon of brown sugar, the baking powder and salt in a bowl. Mix the milk and melted butter and pour into the bowl while mixing (I use my stand mixer). Once everything is blended, it’ll be sticky, add more flour little by little, until the dough has a soft, but not sticky, consistency.

Place the rolls into an oven dish, cut side down. Take a dish that’s just slightly bigger than the rolls, so when they expand, they really stick together. That helps making them more gooey and sticky – and tasty! (If your dish is too big, like mine was, put a little oven safe bowl (like a small rameking) in a larger dish, this way the rolls still get themselves ‘stuck’). Place a small pat of butter on top of all 4 rolls, to mix with the sugar/cinnamon mixture.

Place the rolls in a pre-heated oven (180 degrees celsius) for about 30 minutes or until they’re brown and the sugar mixture has melted.

While the rolls are in the oven take a little plain cream cheese, a little bit of milk and a decent amount of powdered sugar. Beat them together with a stand or hand mixer. Taste to decide if it’s sweet enough for your taste and if not, add some more sugar. (Rather start with too little than too much sugar.) Pour liberally over cinnamon rolls when they’re done.