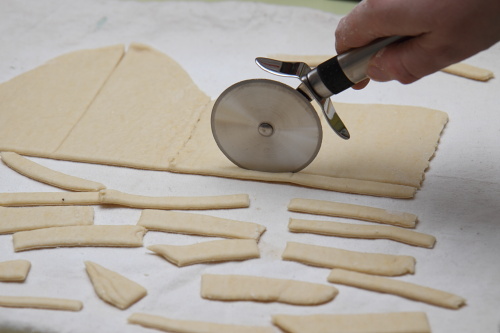 Some days you’ve just gotta say ‘screw seasonal’. Sure, the seasonal veggies are better, but why can you only eat heavy potato dinners or chicken and dumplings or chicken and noodles when the weather is cold and dreary? Why would it be unacceptable to eat something like that on a nice summers day? 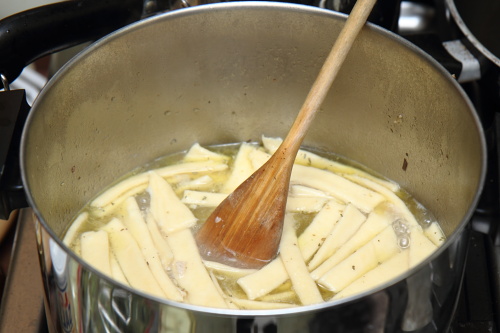 Exactly, there is absolutely no solid reason to never swim against the stream. I mean, salmons do it all the time, and they’re wildly popular. Right? (Well, okay, not with me, but the fact that they swim against is good, that’s cool, I like that… Now go away fishy, I don’t like you!)

What you read above plus 25 million-zillion other random thoughts went through me as I bought chicken and soup-veggies (lazy me) while declaring that I was going to make chicken and noodle soup.

Sure, I realized I wasn’t sick. And I knew it wasn’t fall or winter. And I voiced that concern to myself.
And then I dismissed all that and proceeded with my grocery shopping with the knowledge that I was going to eat chicken noodle soup that night. 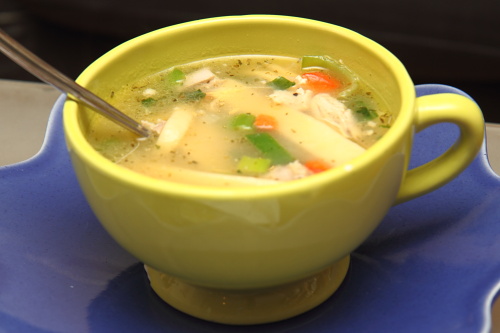 Things like this happen to me quite often. I don’t know why. I can’t help it. (And as long as my beloved doesn’t complain about the food he gets, I’ll keep on doing it – for sure!)

While throwing in the seasonings I decided chicken noodle soup didn’t have to be wintery if I didn’t want it. If I’d keep it a light, thin soup. No cream of something, no milk added, no flour, just broth with chicken, some summer veggies and noodles. I made it a summer soup. Or at least a not so wintery soup.

And there we had it. Chicken noodle soup in summer. With home-made noodles (as that’s the sole reason why I want chicken noodle soup, I jsut want the from scratch puffy, slippery and oh-so-tasty noodles. The chicken soup is just an excuse.

Despite the heat that’s become a little too much for me to bear at times, I’ve really been enjoying summer. At the same time, I’m thoroughly looking forward to fall too. I can’t wait until I’m ready to eat the heavy stuff again. To eat my noodles with mashed potatoes. To make thick, heavy stews, and chicken with stuffing instead of on the grill. Yes I truly love all the different seasonal foods. I just don’t always stick to the right season.

You just mix the flour, salt, baking powder and egg yolks until everything sticks together. Roll it out and cut thin strips from it (whatever size you like, just kindof similar in size). Let them dry on a kitchen towel. If you have a pasta maker, things get even easier, just put it on the widest setting and pull the cough through, then cut it. – No hand-rolling needed!

In the mean time put as much water as you need (measure please!) to make your soup in a pan and add the bone in chicken. Add half the bouillon cubes you need and let it get to a simmer. Let the chicken simmer until the meat practically falls of the bone (If you buy relatively small thigh parts or so, this shouldn’t take too long).
Remove the bones, but leave the chicken in there, then add seasoning and the rest of the bouillon cubes to taste. Bring it back to a simmer and add your noodles. They’ll puff up a little. Once they’re puffy, (this goes away again) add your soup veggies, and let it stand until the veggies are as tender as you like them. Serve and enjoy! 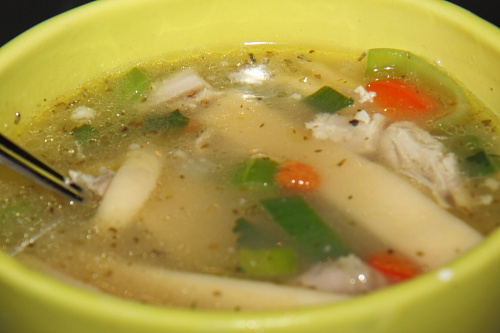