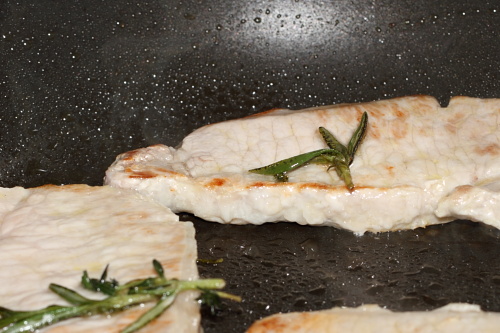 For a while I thought of pork chops as uninspired. I don’t know exactly when that changed, but it has. The last few months I’ve been buying (mostly boneless) pork chops quite regularly. I’ve grilled them, I’ve pan-fried them, both in butter and in oil, I’ve baked them. They’re quick and easy and as long as you make sure you don’t overcook them, they’re juicy and tender. Quick and easy for a work-night-dinner with a simple pasta, some roasted potatoes or whatever other carb or veggie you like to quickly whip up.

The way I treat them can vary. Sometimes I slice them very thin (in half, or thirds even, about 1/4 to 1/3 of an inch thick) and marinate them for 15 minutes in olive oil, crushed garden and resemary I picked from my garden. Just drop them in a dry skillet, turn once brown and you’re done. They’re great when they’ve cooled off as well, so you can make them in advance and just serve them in a cold dinner with a salad on hot summer evenings.

I’ve also been known to leave them thick, as is, (3/4 of an inch or so) and just salt and pepper them and brown them in butter. It gives them a slightly caramellized, crispy exterior. Very tasty.

Recently I wanted to make portobello-burgers, but it was raining and I don’t like to stand over my grill with an umbrella. also, I’d realized that I’d forgotten to buy buns, which makes the burger concept fade completely anyway. So I changed the concept and topped a couple of fairly thin pork chops with the whole portobello’s and placed them in the oven. The pork and portobello infused eachotehr with their flavors. I quickly added some potato croquettes and voila, a meal! 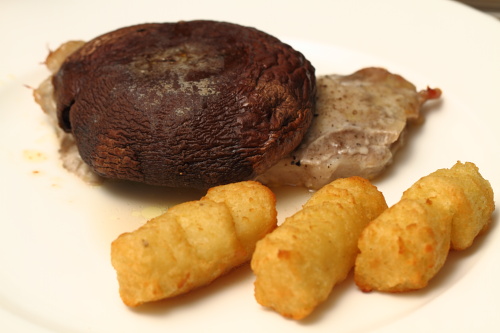 I love it when quick and easy meals turn into yummy dinners!

One Response to Pork chops