About 10 years ago, during a family reunion, I discovered the magic, magic deliciousness of lemon-poppyseed muffins. Since I didn’t want the cereal that was offered, I went to the grocery store, saw those things and figured I’d give them a try. I figured they could never be worse than cereal.

Right then and there in Kokomo Indiana I discovered my all-time favorite muffin. 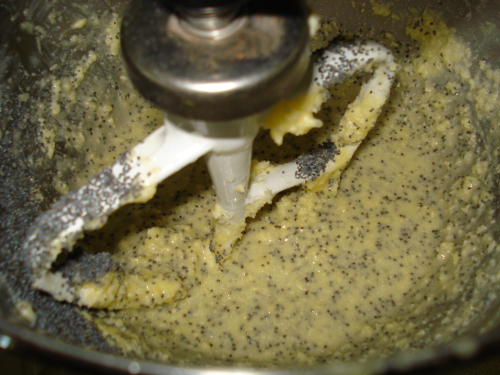 In the years that followed, whenever I’d be in the US, the first thing I’d grab in the grocery store, would be lemon-poppyseed muffins. They weren’t available in Holland, so I’d have to get my fix when in the US. I have no idea why it never occurred to me to look up a recipe.
After a few years, for some odd reason which I still disagree with, they disappeared from grocery stores in the US as well. The only place I’d occasionally find them would be baker/deli counters in airports. Obviously I would buy them, as I needed my lemon-poppyseed fix, but it was never enough. That year I made them myself for the first time. From a package, just add water, that kind of stuff. Better than nothing, but not quite the same.

About 3 years ago I finally came to my senses and looked up a recipe. Since then I’ve tweaked and altered it, and made those muffins many times over. Either as actual muffins, or in loaf form, when I couldn’t find my muffin tins, or had too big a batch. Muffins in the shape of a loaf still taste awesome, after all.

This week I got my once-in-a-while craving for lemon and poppyseeds again. So I made a loaf. I altered and tweaked a little more (partially because I just grabbed the wrong bag of flour). They actually taste a little healthier made with 1/4 of the flour replaced with whole wheat instead of plain white. Still very tasty though!!!! 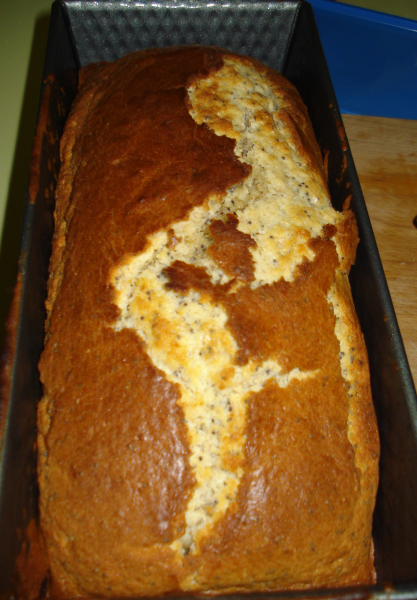 Cream the butter, lemon zest, sugar and some lemon juice. Beat in the eggs. Stir in the poppy seeds. Add flour, baking powder and salt to the mixture and mix slowly. Add the milk while mixing until everything is incorporated and has become a smooth batter. If you don’t mind eating raw eggs taste now to see if you want more lemon juice, if you don’t, just go with your gut.
Bake in muffin tins of a loaf-type non-stick cake pan on 190 degrees celsius. Muffins take about 20 minutes, a loaf takes a while longer, test doneness, if no dough sticks to your toothpick (or whatever you prefer to use to test cakes) it’s done.