I don’t think I’ve ever really had a favorite restaurant before. There’ve always been a multitude of restaurants that were sure bets, with constant, good food, but a favorite, I’m not so sure about that.

Remember how Laurens and I visited Milan in June. We found this awesome restaurant on our first night and couldn’t remember the name, nor the location of said restaurant. Remember I had the best pasta of my life there. And delicious tender beef, seasoned just right. And the coffee, and the bread and the wine, oh my.

We figured we’d never ever find that restaurant back. But when looking for a restaurant on our first evening in Milan again, we did wander in the same direction. The only restaurants we could find were kebab and chinese restaurants, which was definitely not what we wanted. So we wandered on a little more, aimlessly looking for something close by. We knew the famous restaurant from June had to be close. But we still had no idea where. It was on a corner, but then again, there are about a zillion street corners everywhere.

Just as we were about to turn into a street towards the main road, or settle for a kebab, we saw the familiar burgundy awning. With the brasserie across the street, which I recalled as I didn’t want to eat at a place called Bruxelles while in Italy. 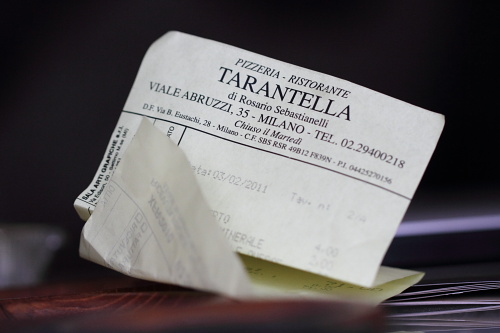 I was about jumping for joy. We walked in, were seated and immediately received some bread. We ordered the house wine and some water while browsing the menu.

The restaurant had the same no-nonsense, cozy, friendly, but not too fancy atmosphere it had back in June, when we sat under the onning outside. The waiter was friendly and there when you needed him, but not in-your-face like they are in American restaurants and unfortunately often in the better Dutch ones. I don’t need you to come ask whether the food is okay and if I need more drinks or whatever every 10 seconds. I want good quality food and the company of people I choose, not those who happen to work there. If you pay attention to our facial expressions, you can figure out if something is not okay in a matter of seconds. And if you just pay attention, the customers will call you when they need something, instead of you interrrupting their dinner all the time.

At this restaurant they had good service down to a T. Look up from your plate in their general direction, and they came closer to give you the chance to address them, but far away enough that if you just happened to glance there, you wouldn’t be bothered.

The house specials of the week were presented on a separate little card, instead of read to you in a manner that tells you ‘decide now, ’cause I’m not telling you again’. The menu was extensive, but not overly. They offered something for every apetite. The traditional primi piatti, secondi piatti and dolce, but also pizza’s and ‘piatti unici’ – one course dinners. They had a nice wine selection, for those who prefer that kind of choice, but their house wine was affordable and very good. The coperto, (a charge every Italian restaurant charges for you to sit down for dinner) wasn’t over the top pricey. The prices on the menu weren’t extremely cheap, but definitely not expensive either. And when you consider the amazing quality of the food they served, you would’ve expected everything to be much more expensive.

I know doing what I did made me a total loser, but I ordered the exact same dishes I did last year. I started off with the fussilli carbonarina, a pasta with saffron, zucchini and speck (a type of cured ham). As my secondo piatto I ordered the tagliate di manzo alla Robespierre, thin sliced grilled steak served on a hot plate with green peppercorns and rosemary. Laurens did order different foods from last time and went with the penne con carciofi, pasta with artichoke and a grilled steak.

My dishes were even better than I remembered. The saffron, zucchini, speck, parmigiano and whatever the base of the sauce was, left a gigantic explosion of taste in my mouth. Each bite was better than the previous, as in every bite I was able to identify more of the flavors. Simply amazing. The penne con carciofi which Laurens generously shared a bite of, was much more refined in taste. Not as much of a taste explosion, but a gentle, subtle reminder of what each ingredient was and the optimum way to let that flavor come out.
The tagliate di manzo alla Robbespierre was cooked to perfection, with the strong but subtle taste of rosemary present in each bite without being overpowering. The green peppercorns provided a nice little burst of flavor whenever one popped into your mouth. The grilled steak was a great steak, simply prepared the way it should’ve been. Sometimes a great steak needs nothing but searing it with grill marks.

When looking at the desert menu we decided we couldn’t finish a desert as well (hey, you really need to train yourself in Italian eating, not the first day!) so we opted for just coffee. After coffee we paid and I tried to explain the waiter (in my best Italian which is pretty darn terrible) the story of us having wanted to return as it was so wonderful. The waited smiled at us, told us he was happy we’d liked it so much and to come back again. He proceeded to give us their business card.

So as of now I can claim my favorite restaurant. It’s Tarantella at Viale Abruzzi 35 in Milan. It’s very close to the famous shopping street ‘Corsa Buenos Aires’, but far enough to cater to mostly locals. I highly highly recommend it. If you have the chance while you happen to be in Milan, it’s certainly worth the (very slight) detour. No-nonsense, perfect service, and the best food ever!

And to further explain how big a fan we are of this restaurant… We told Laurens’ parents where we’d eaten and how wonderful it was, they immediately decided that later on during our stay there we would go there with them. Our next dinner there was equally great and apparently they have more taste-explosion pasta’s on the menu, as my mouth witnessed first hand. We did leave room for a split dessert that night, and wow, am I glad we did. We had the mousse de castagne (chestnut mousse) which was simply amazing. It was a pudding-type-mousse, pretty dense, but full of flavor and without the overly creamy or jello-like texture I dislike about puddings. It was airy and just creamy enough, but grainy from the chestnuts at the same time. It was a pleasant grainyness, which told you you weren’t eating something instant or just ‘chestnut flavoring’. I’m fairly certain next time we visit there, I won’t be willing to share my dessert!

2 Responses to my favorite restaurant – Tarantella