We spent 5 days in Milan to visit my in-laws. Going to Milan is always a great treat to me. Not only because of the fact that it’s vacation, with nice weather, amazing historic sights and family, but for a large part it’s also due to the amazing food. Going into an ‘express’ supermarket makes me giggle. The loser version of a grocery store is actually better, in quality and choice, than the large Dutch (or American) grocery stores. 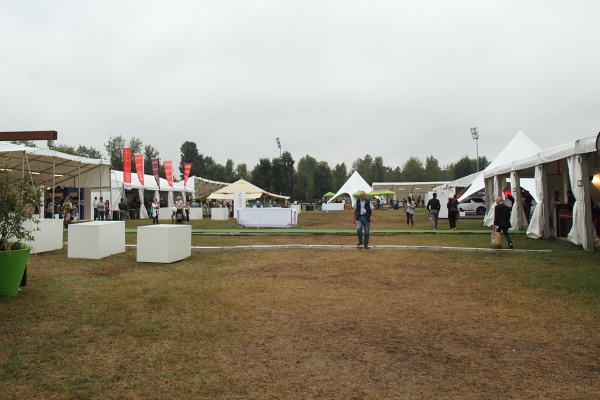 This trip to Milan was extra foodielicious, because the week before we left, I realized that not only would there be a movie, a music festival and the fashion week, but the first days we were there were the last days of ‘Taste of Milano’. 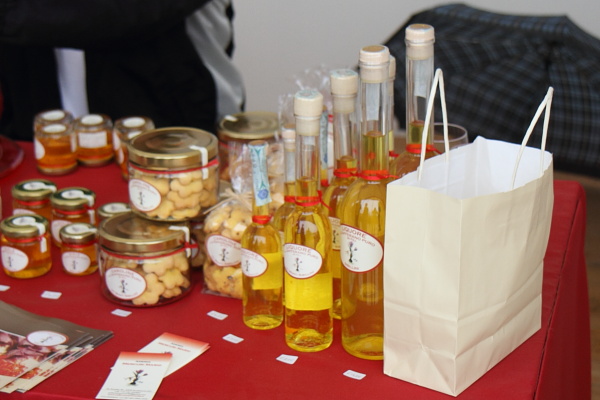 Saffron everything at Taste of Milano

When I found out I didn’t hesitate one second (or ask Laurens if he was even interested), but immediately contacted them for tickets. And on Sunday, the last day of Taste of Milano, we went to the ippodromo where it was held. 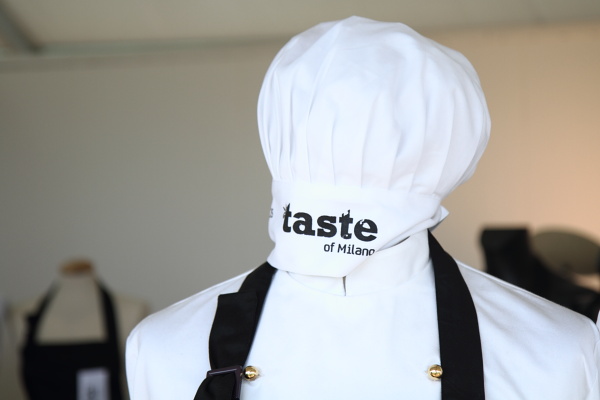 Cute chef's hats and aprons at Taste of Milano

When we came back to Amsterdam, I realized that Taste of Amsterdam had just started. I figured I’d contact them for tickets as well, and so two Sundays in a row were spent at a ‘Taste of…’ event. 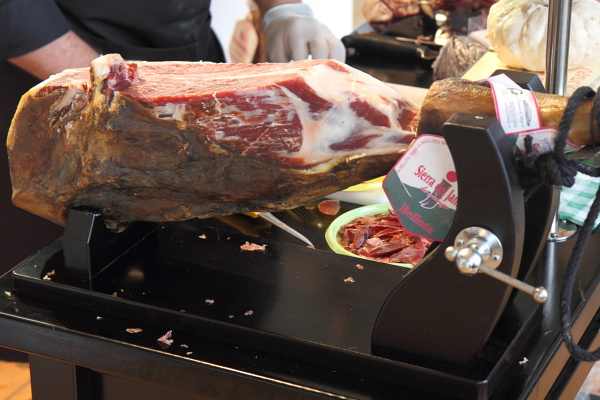 Delicious hams at Taste of Milano

Now Taste of Milan and Taste of Amsterdam look somewhat similar. The furniture, tents and logo look exactly alike. The two events couldn’t be more different in atmosphere though. And to be honest, I felt much, much more in place at the Italian event, despite the fact that I’m a Dutchie by birth. 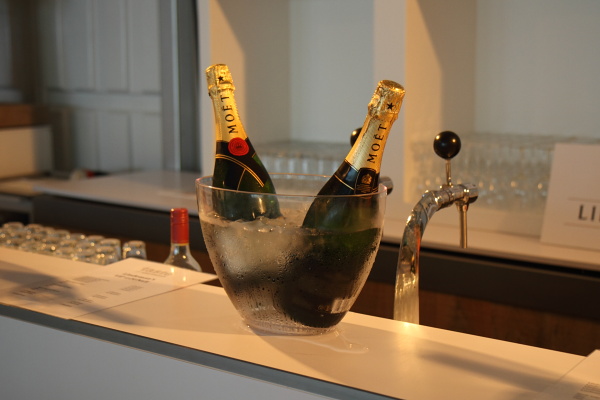 Champagne for VIPs at Taste of Amsterdam

Taste of Milano was -despite the rain and mud- a fun event. People who went there, often with their children who ran around in the mud while eating the finest cuisine – were casual. They were there to have fun. To find the tastiest treats, to learn about some wonderful products, to taste. It was very laid back which made great to just hang out and eat and drink and try things. The dishes that were offered from the top 20 restaurants of Milan all looked amazing and the few dishes I tried tasted as great as they looked. They were extremely refined and special. It reassured us that we really need to have more time in Milan, because there are so many restaurants we just need to try out! 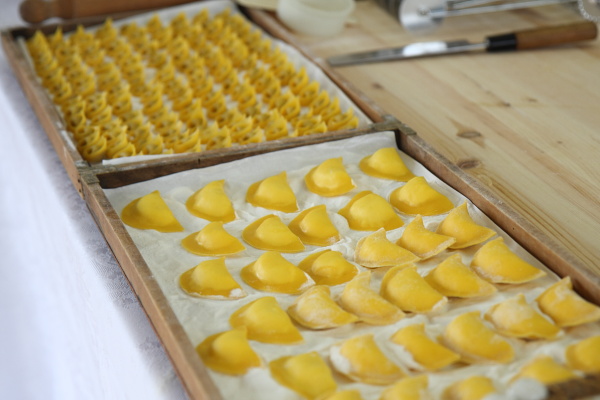 Hand made tortellini and ravioli at Taste of Milano

The dishes offered by these restaurant ranged from 4 to 6 euro’s with a lot of them being 4 or 5 and only a slight few being 6. Besides the restaurants there were a whole lot of booths presenting their products, which offered their products to taste for free or gave some demonstrations. More on the tasting of some amazing wines and the making of some wonderful chocolates will follow in a next blog post. 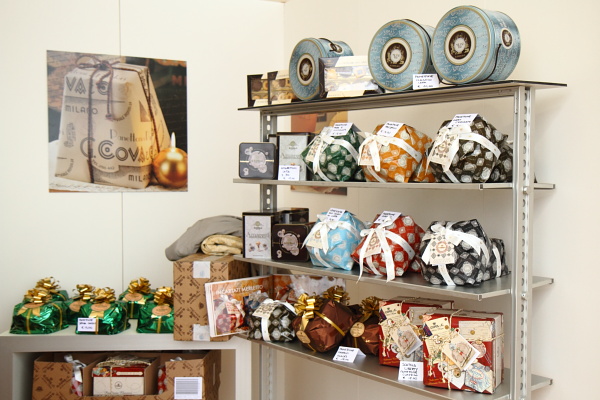 Traditional (and less traditional) panettone and pandoro at Taste of Milano

Taste of Amsterdam was completely different. The weather was really nice, so it was busy. It didn’t seem like the guests were more food lovers though. It seemed to me that it was a seen-and-be-seen event for the nouveau riche of Amsterdam (or their wannabe counterparts). It was just a very, very different atmosphere. One I personally don’t care for that much. 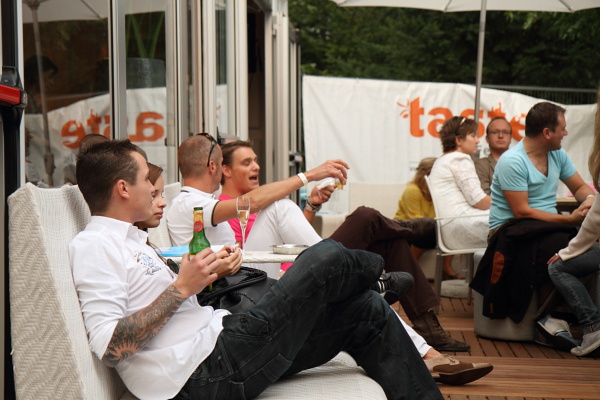 Visitors of the VIP lounge at Taste of Amsterdam

The restaurants that showed themselves at Taste of Amsterdam were very decent, but didn’t seem to me like the absolute top 20 of Amsterdam. If that’d been the case Ciel Bleu, Yamazota and La Rive (among others) would’ve been at the event.  Some came close or are in the top, but I think we all have to agree that while Fifteen is a great concept, it’s not one of Amsterdam’s very top restaurants. The dishes the restaurants showcased had the same 6, 5 or 4 euro price structure, though more dishes were in the 6 euro range than in the 5 or 4. Also there were very few dishes that gave an instant wow factor. I mean come on, I love pizza, but mini pizza’s aren’t an exceptional dish to show at a food event, just like barbecued pork sausages. Tasty, but nothing close to exceptional. 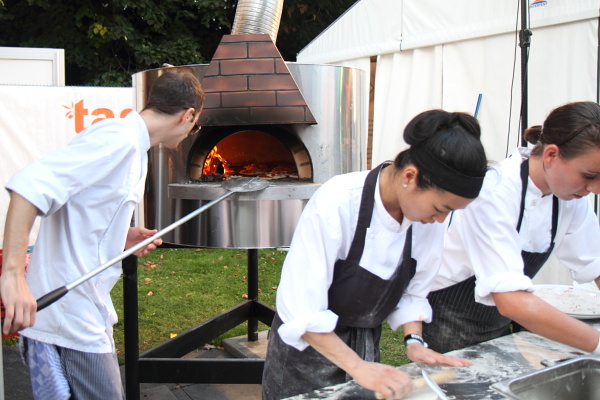 Mini pizzas at Taste of Amsterdam

The only dish that had a wow factor was The Amsterdam-onion-sherbet, made with liquid nitrogen by restaurant Bolenius. 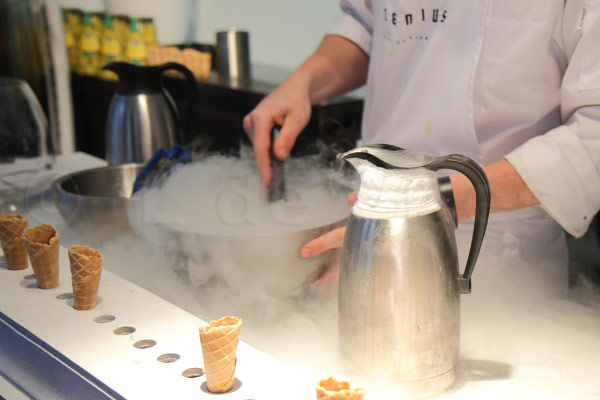 The many booths around the event also didn’t seem to be interested in educating us about their products as well as sell, sell sell. If you’d be able to get a taste, portions or pieces were almost too small to even taste something, or actually had to be paid for. A nice exception to that was the ‘workshop on how to make a cheeseplate’ (will blog about that later) and South African Vineyards (Idiom), that actually gave me a small glass of a wonderful Viognier to try. A big shout out also goes to Maldon Salt, who understands that the way to getting people to buy your product, is by first giving it. The big box of salt I received has been well used already, and will appear in recipes soon (and will be bought again when I’m out!) 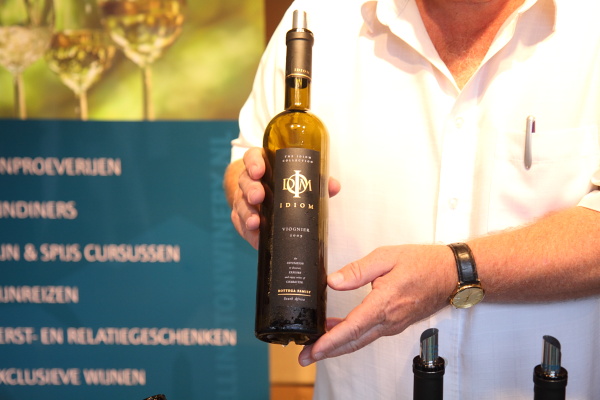 Idiom vineyards letting me taste their Viognier at Taste of Amsterdam 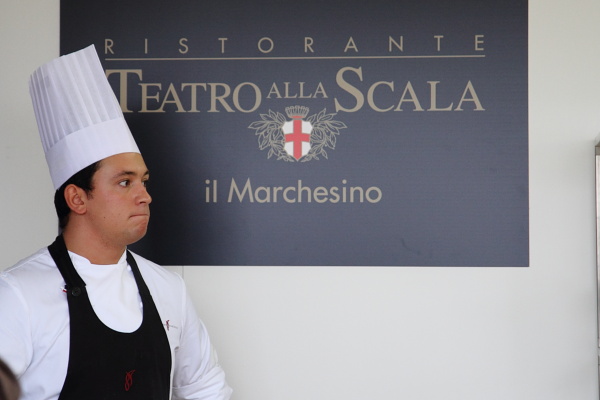 2 Responses to Taste of…