At least in this house we do! 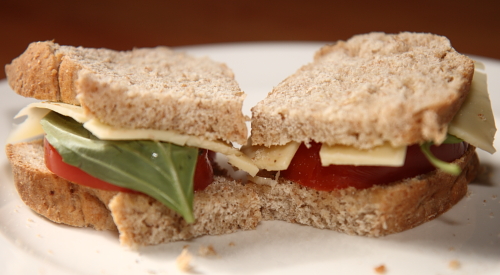 Especially when made with awesome home-made bread and the last of the awesome tomatoes I got last Friday. Seriously, I LOVE these tomatoes. I’ve said it before, but they actually smell and taste like tomato, something that’s hard to come by these days.

The problem with tomatoes is that they’re actually a summer product. They need a lot of sun to ripen, get red and fragrant and tasty. Nowadays however, people (including myself) want tomatoes all year ’round. So they’re being grown in greenhouses with fake light and in the worst case, sent to ‘riperies’ (I kid you not, they exist) where they’re sent in green, and come out fully red. All thanks to the invention of chemicals that can do that. It’s amazing that we even expect things to taste the same, when they haven’t had the chance to grown on their own, to sit in the sun, to soak up taste from their roots, from the soil. Let nature do what it’s good at.

It seems like ‘man’ needs to and wants to control everything (which isn’t strange to me, being somewhat of a control-freak myself) but aren’t we taking it overboard? That’s what I realized when I got my tomato-tasting-tomatoes. They’re organic and I have no idea where they got them from (some part of the globe that has sun year-round??). Yes, they were insanely expensive, but oh the taste! So worth it!

I wish I actually had the courage to start eating and cooking seasonally. Wouldn’t that be awesome? There are several programs that sell you veggies straight from the farm, you tell them for how many people and you get a package of seasonal vegetables each week. It’s not even that much more expensive than buying your produce at the store. I don’t know if I can do that though. Sometimes I just want lettuce and tomatoes. I like spinach and pumpkin any time of year. I don’t think I’m quite hippie enough to just deal and wait 6 to 8 months before I can have my favorite foods again.

So back to today. Daylight savings in Europe kicked in today, so by the time we woke up it wasn’t really breakfast time anymore. Closer to lunch than brunch to be precise. All the more reason to make a big, nice sandwich. The fresh made bread, juicy tasty tomatoes, organic basil and a medium-ripe farm cheese were seasoned with a little salt and pepper and a drizzle of olive oil. 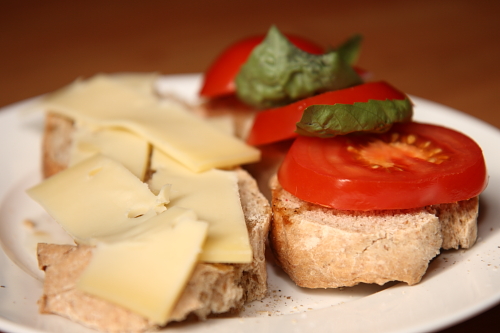 Sometime it really is that simple. Sometimes you really don’t need to get fancy or creative. Just compose a couple of tasty, high quality items (which is the absolute base of Italian cuisine by the way) and it balances out to a perfect dish . Or sandwich in this case! (Added bonus is L being able to play around taking pictures with natural light. Life is good on a sunday morning/afternoon)

12 Responses to Everybody loves sandwiches…