Sometime last week, on Foodblogs, I saw a zebra cake. It looked very very impressive, so I opened the post to see if I could figure out what kind of insanely difficult process was needed to create it. A few clicks of my mouse later, I found that it was a pretty simple system of layering cake batter. So I had to give it a try. 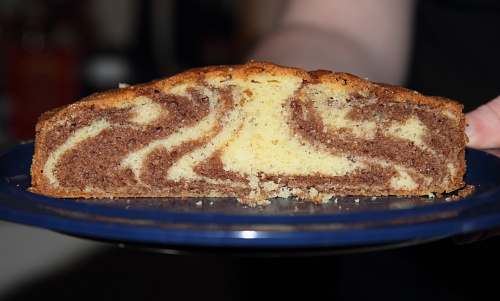 Obviously there are many recipes for Zebra cake, but I just used my general vanilla and chocolate pound cake recipe and added it to the pan in the manner shown in these pictures. Next time I’ll make a bigger batch of batter, as that’ll surely enhance the effect. Also, I might make the batter a little thinner by adding an extra egg, so it’ll spread better and therefor give a cooler result. All in all, it was still very very tasty, and cool to look at! 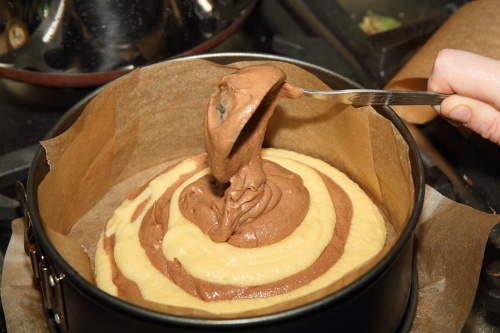 Mix the butter and sugar until creamy. Mix in the eggs one at a time. Add the flour (and baking powder if that’s what you use) bit by bit, while slowly mixing the batter. Once all the flour is incorporated, mix for another 30 seconds or so.
Divide the batter in 2 and add vanilla extract to one half (and mix in well) and mix the cocoa powder well into the other half of the batter. Make sure it’s evenly colored (fairly dark). Since I’m in Holland I can’t really use anything else than Dutch cocoa, but I hear that anywhere in the world, that’s the preferred stuff.
Pour both batters into a cake pan in any matter you prefer (to get the zebra patterned cake, put it in in the manner shown in these pictures, layer by layer of different color batter). Place cake in a pre-heated oven (175 degrees celsius) for about an hour. Test doneness with a skewer. If you use a loaf type pan, let it cool a little bit before moving it out of the pan on to a cooling rack. If you use a springform you can loosen and remove the springform immediately, and move the cake from the bottom to the cooling rack after a few minutes (when it’s cooled enough so you can actually touch it with your bare hands). 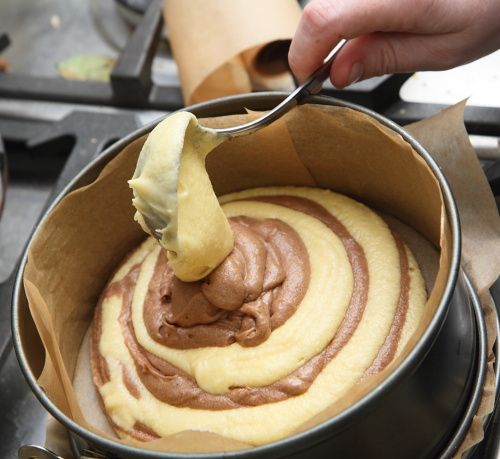