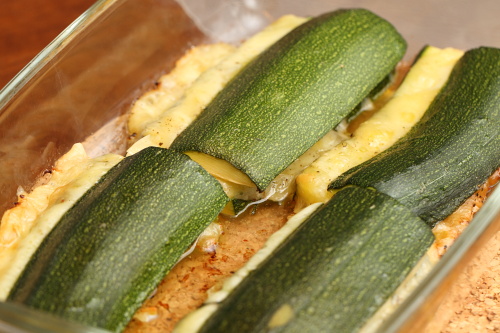 Sometimes simplicity really is the key to a wonderful meal. Sometimes you don’t really have to do anything, to make something delicious. That’s the case with this zucchini recipe. Actually, I shouldn’t be calling it a recipe. Honestly, I don’t feel this is a true recipe. A recipe to me is something where you actually need to follow directions, have a number of steps and create something totally different from the ingredients. Or something like that. I probably don’t explain it correctly, but for something to be a recipe, it needs to be more difficult than this dinner.

I know not everyone thinks about this the same way. I honestly saw a ‘recipe’ written out somewhere, the other day, for an almond butter and apple sandwich. It had an ingredient list and steps stated. Take bread, smear almond butter, then put slices of apple on top. Ooh dang, now I’ve committed plagiarism, or not, I’ve shortened it, significantly, and I’m not one known for writing short.

The dinner I made, which the zucchini and cheese was part of, was simplicity in it’s purest form. It was embellished by a simple, fairly thin pan grilled boneless pork chop and some potato croquettes which I still had in my freezer. 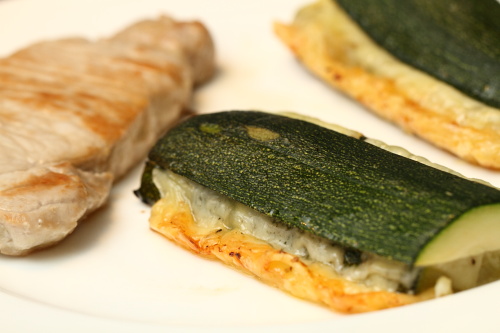 The zucchini really is the simplest thing in the world. You cut your zucchini in half, so you have 2 somewhat even round pieces. Then split those in half, so you have 4 pieces with 1 flat side each. You then slice those in 2, horizontally, that way you can make a ‘zucchini sandwich’. Put some slices of good cheese (I used a medium aged farm cheese) in between your zucchini sandwiches, sprinkled them with some fresh ground pepper and popped them in the oven until the zucchini was mostly tender and the cheese was melted. Easy peasy. Do we call that a recipe?

So was this a simple dinner? I say yes, most definitely. All in all the prep work took me about 5 minutes, maybe less, and besides that it was just waiting to take the zucchini out of the oven.

It’s not worth typing up an entire recipe though. If someone can’t follow ‘slap cheese between slices of zucchini’, I doubt they’ll be coming to me for a recipe anyway.

One Response to Zucchini grilled with cheese