I thoroughly realize that I’m no George Lucas, writing a prequel before going through the actual event and at least 2 sequels, but that’s just how I roll.

I heard about Food Blogger Connect for the first time right around the time it happened last year. I couldn’t make it, but ever since I’ve been hoping that this year it’d be around a time I’d be able to go.

Halfway through february all up us pre-pre-registrants (aka the people who commented on the website and said, “heck yes, keep me informed, I so want to be there!”) received an e-mail, stating that early registration was now open and to be quick to see if you wanted a pass for the special workshop, as there were only 20 spots.

I went and checked it out and decided to go without the workshop, but immediately did register. A couple of days later my confirmation was in and I was on my way too FBC. Figuratively speaking – obviously – as it was still February. Even if I’d walk there, I wouldn’t need so much time to get there.

Now, a couple of months later, anticipation is slowly starting to set in. I bought my plane tickets (and made sure to use an airline that allows me to take luggage without extra charge!), I made my hotel reservation (across the street from the venue, I’m still looking for a roommate!) and I designed and ordered a bunch of business cards for my blog.

I’m about ready to go, even though it’s still over 2 months away. I’m starting to get a little antsy too. I don’t know anyone there, only a couple of blog names and twitter handles. I’ve never been to something like this before. Am I food-geeky enough to fit in? (Sure, I have a million-and-one kitchen gadgets, but I don’t run around with my camera all day, I have Laurens for that.) It’s like high school all over again. Really tasty high school – with wine.

Most of all I’m super excited though. I look forward to putting faces to the familiar blog names. I am excited about meeting new people and making new friends who are as crazy about food, cooking, baking, grilling and kitchen gadgets as I am. I anticipate learning a great deal. And I think it’s just awesome to not be the crazy foodie for a whole weekend – as when you’re with a whole bunch, it’s not that crazy anymore. 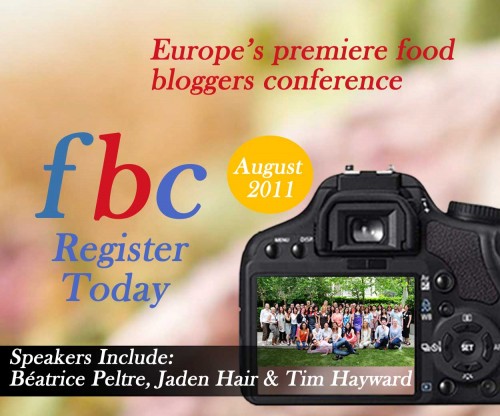