Now I realize that making cheesecake a second time isn’t really an accomplishment worth tooting your own horn about, however, I improved my recipe.

I’ve improved it so much, that it would be mean not to share it. 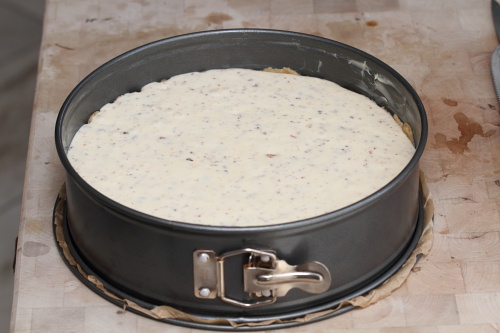 See, my cheesecake is one with chocolate, caramel and nuts. Recently, while browsing through a bunch of other blogs, I read about someone using chocolate chip cookies instead of graham crackers for her crust. It sounded like a grand idea. A grand idea which could however be improved.

How about using chocolate chip cookie dough for the crust. Unbaked cookie cough as a bottom and up the side, filling it with cheesecake batter and baking it to creamy delight. 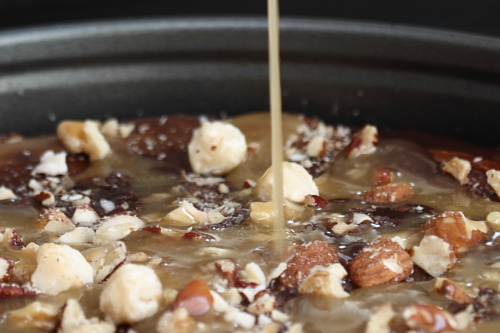 See last time, while the cake was very tasty, it was also the slightest bit tangy. Not unpleasant, but I figured that taking that tang out would make it even creamier and smoother. Turns out that (for a chocolate/nuts/caramel cheesecake) I was right. I think I’ve achieved my ultimate cheesecake batter. I don’t think I will, or should, ever alter it one bit. Until I find more improvements that is! 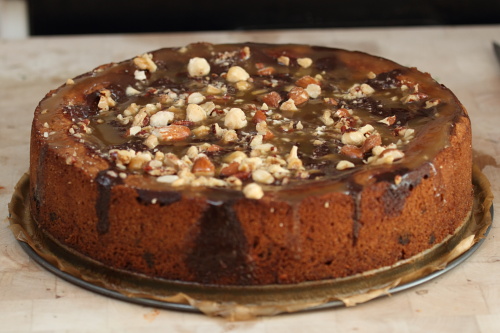 Because google recipes code and/or this plugin and/or maybe even this latest version of wordpress doesn’t work correctly, I’ll first give you the links to the recipes you need to complete your ingredient list:

I substituted some of the chocolate chips in the cheesecake batter for butterschotch chips. I bet white chips could be good too!

This fills one large springform pan and is very rich.

This recipe is also linked up from Sweet as sugar cookies. Check out the other sweet treats posted there!

8 Responses to Cheesecake, new and improved