Apparently Holland is one of the very few countries that eat white asparagus. Outside the northwestern part of Europe in general only the green version gets eaten. The white version grows under ground and is considered a delicacy. 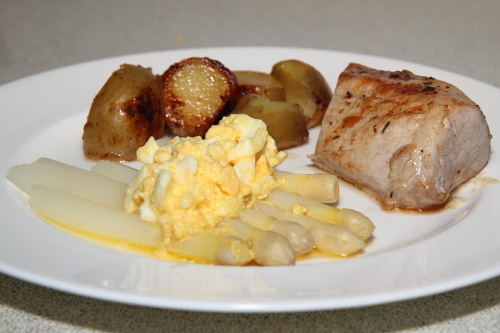 Now nothing bad happens to their taste when you don’t prepare them right away, but the stem slowly gets woody from the bottom up. And you need to remove the woody part to eat them. So by the time they’ve been in the fridge for 5 days, about 2/3 of the stalks had gone woody and needed to be tossed. Also, some of the tips had gone a little mushy and needed to be cut off. Too bad, as the tip sincerely IS the best part of the asparagus.

See here, the result of trimming the asparagus… 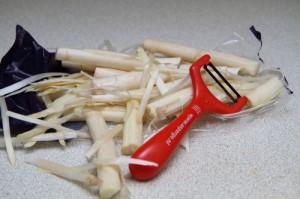 Fortunately, the parts that were still good and the tips that didn’t go mushy, were still delicious! 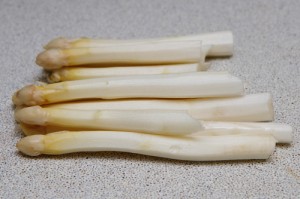 White asparagus are traditionally served with hard boiled eggs, I don’t know the origin of that, but they are. Also, usually they have a buttery sauce and ham served with them. Instead of ham, I actually served them with a piece of braised pork loin and caramelized potatoes. I ended up cutting the egg up pretty small, melting butter and adding the egg to the butter. Despite the portion being quite small, it was very very tasty. Next time I’ll make them the day I buy them! 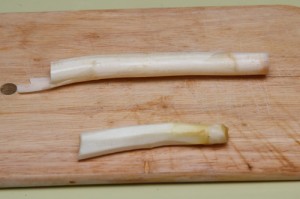 Snap and peel the asparagus. The woody end needs to be removed, if you snap them, they’ll actually break right at the end of the woody part, so you won’t trim off too much or too little. Also, with white asparagus, the outside needs to be peeled. Special asparagus peelers do exist, but are pretty much the same as standard potato peelers. Peel them from right underneath the tip to the bottom, the tip doesn’t need peeling.

Bring a big pot of salted water to a boil. I actually add the egg as soon as I put the pot on the stove. Once the water boils, leave the egg in 2 or 3 more minutes, then remove, but don’t chill. You want the egg hard-boiled, so it’s fine if it doesn’t cool and just gets a little harder. Add the butter to a small pan to melt on the stove on very low heat. Add the asparagus to the boiling water, while they’re boiling, peel and cut the hard boiled egg. Once the butter has melted, add the egg to the butter, stirr well and leave it on the lowest possible heat until you’re ready to serve. The asparagus only need to boil for a couple of minutes, depending on size and amount in the pan, so check them after 3 or 4 minutes. If they’re soft, they’re done, remove them from the pot. Lay the asparagus on a serving platter or individual plates, scoop some of the egg/butter mixture over them, serve and enjoy!!!